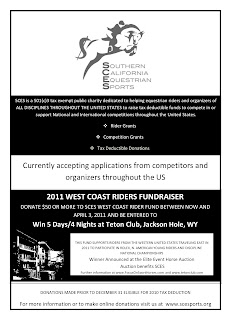 Anyone donating $50 or more gets entered in a drawing for the First Prize of 5 days/4 nights at the Teton Club in Jackson Hole WY.
Second prize is free Event Derby entries for 2011 for one horse/rider combination.
Third Prize is a Free cross country schooling and catered lunch for your barn at 3 Day Ranch (up to 10 horses).
Anyone in us can enter.  Drawing takes place during the showjumping phase at Galway Downs CIC, April 3.
DONATE HERE!
Posted by Lisa Thomas at 11:38 AM No comments:

Welcome to the new SCES blog, designed to keep our fans & competitors up to date on SCES news!

We're in the midst of updating the website & creating this blog, so please join us in following our riders & their accomplishments, as well as updated events via this blog.

The following news item on Jennie's Victory at Galway is compliments of California Horse Trader. 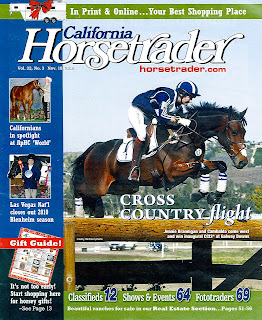 TEMECULA – Something new visited Galway Downs Nov. 4-7 — the first CCI3* event ever held in the western U.S.
Someone familiar went home with the title.
Jennie Brannigan, who as a Temecula teenager learned under Susie Hutchison just a stone’s throw from Galway, returned to win the Galway Downs International Three-Day Event CCI3* on Cambalda. It was the first trip to the venue in years for the rising eventing star who works under Olympian Phillip Dutton in Avondale, Pa.
“It meant a little more to come back here and win,” admitted Brannigan, 23. “I was saying to everyone that I was more nervous to do this event than I was to compete in Europe. It was cool.” Alexandra Slusher rode Juicy Couture to the CCI2* championship.
A high finish in dressage and also on a tough 10-minute, 17-second cross country effort positioned Brannigan well for the final day’s stadium jumping. Cambalda, an Irish Sport Horse gelding owned by Nina Gardner, overcame a miscommunication at fence 4 in the show jumping before making a spectacular effort to leave the rails up. The clean round—finishing exactly on the optimum time—gave them the victory over Alexandra Slusher on Last Call (49.2) and James Alliston on Jumbo’s Jake (55.8).
“I always struggle with keeping him in front of my leg, and the mistake at fence 4 was my fault. He’s only 8, and I can’t imagine what he’ll be like next year, because of how much he’s improved this year. He’s won four FEI events this year. He proved he’s a good horse.” Amy McCool photo
Kristi Nunnink of Auburn and R-Star took fourth in the CCI3*.
Brannigan also thinks the Galway Downs has proved itself too. “Galway Downs is just as good—or better—as any place else,” said Brannigan, who competes every weekend nine months of the year. “I think this three-star is going to show that eventing is not all about the East Coast. I think the West Coast deserves more credit than it gets.”
The winning performance earned $7,000 of the $21,000 purse in the Galway Downs CCI3*. All told, the Galway Downs International Three-Day Event offered $33,000 in prize money and more than $50,000 in total prizes.
Show Director Robert Kellerhouse, a Southern California native, was pleased by the show’s outcome. Amy McCool photo
Alexandra Slusher and Last Call finished on the heels of Jennie Brannigan and Cambalda in the CCI3* at the Galway Downs International Three-Day Event on Nov. 4-7.
“In the context of California, it’s a little bit of the icing on the cake for event riders,” said Kellerhouse. “Gina Miles won the individual Silver Medal individual at Beijing two years ago –- first time ever a California rider’s gotten an Olympic Medal. And, in the last three years, our California Young Rider team ages 16-21 have gone back to Kentucky to compete at the North American Young Riders and have won gold medals all three years. In my whole life we’d only won the Gold Medal twice before the last three years.
“So, there’s a crop of great, talented riders who now have a place to play –between the events here at Galway, the events at Twin Rivers, the events at Woodside and Copper Meadows and other places here in California. It’s giving people all the levels they need to be successful, and in turn the organizers running relevant courses that are getting people prepared to compete, whether it be here, Kentucky or Beijing, Europe or wherever.”
Slusher moved into top contention after Tamra Smith didn’t present second-placed Corner Street at this morning’s final horse inspection. Slusher and Last Call put in a lovely double-clear round to take home the red ribbon and a check for $5,250.
“I’ve got a good vibe going with this place,” said Slusher, 23. “I have a lot of confidence here, and I needed this to be my last event of the year. I couldn’t have asked for my year to end any better. “To finish in the 40s in a three-star—I couldn’t have dreamed this week could go so smoothly,” she added.
Alliston, who lives in Castro Valley, Calif., but represents Great Britain, and Jumbo’s Jake moved up steadily all weekend, and added only 1 time fault to their score today, to take third. The bay Irish Sporthorse is owned by Alliston’s girlfriend, India McEvoy.
“This is my biggest result for sure. I’m stoked,” said a happy Alliston, 26. “It was really exciting to finish clean yesterday on both horses.” He also finished seventh on Parker II.
Slusher’s great weekend continued when she and Juicy Couture won the CCI2*. They dropped one rail in today’s show jumping, but they had it in hand and finished on a score of 53.2. “It’s really special to me to win on her, because she’s been the most difficult horse to ride,” she said. “It’s been such a long process, and it all came together this weekend.”
Jolie Wentworth and GoodKnight continued their upward mobility by jumping clean today to finish second in the CCI2*, on their dressage score of 58.1.
“I thought it was a very difficult course,” said Wentworth, 29, of the show jumping. “There wasn’t much let up; it was boom, boom, boom. I think I really had an advantage because I had a clean round on my one-star horse, so I knew what to expect.”
GoodKnight is a recent purchase for Wentworth, who said that one of the main reasons for purchasing him was his clean jumping technique and history of clean rounds. She had hoped to ride him in the CCI3*, but they lacked one of the necessary qualifiers. “I would have really liked to have ridden in the three-star,” she said. “I’ve been coming to Galway Downs since it started and I was a young rider, so nothing would have made me happier than to do the three-star. But now I’ll have to do it next year.”
Amber Levine and Nantucket Red (58.2) lowered one rail to drop behind Wentworth by just .1. They had a an awkward moment in the triple combination, and then lowered the jump that followed it as Levine struggled to regain her reins and composure.
“He jumped in [to the triple] great, and then he thought too much about it—he thought he needed [to add a stride] to jump it well,” she said with a laugh.
Still, she was thrilled to finish third in their first start at the CCI2* level. “It will probably hit me on the ride home,” she said. “He was plenty fit. He looked great this morning, and he felt great this afternoon. Now I hope to do the three-star next year.”
Show jumping caused only minor shuffling in the CCI1* standings. Overnight leader Lindsay Connors and Balingowan Pizazz lowered one rail to drop to second (49.6), while a clean round vaulted Maxance McManamy and Project Runway (47.5) to the top of the leaderboard.
MORE RESULTS: See website http://bit.ly/011BGalway
Posted by Lisa Thomas at 11:12 AM No comments: